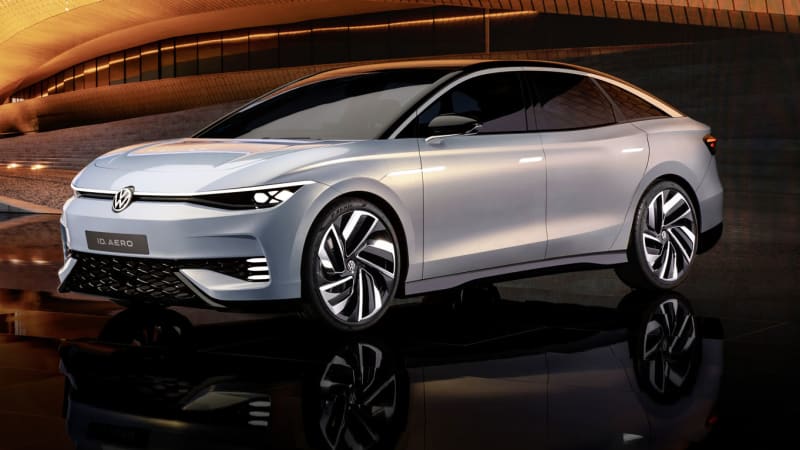 We’ve seen a hatchback, we’ve seen crossovers, and we’ve seen a minivan. One of the body styles missing from Volkswagen’s growing range of ID-branded electric cars is the sedan, and the Wolfsburg-based company filled that gap by unveiling a concept called ID.Aero.

Volkswagen first floated the idea of an ID-badged sedan when it unveiled the ID.Vizzion concept in 2018. While some styling cues have been carried over from the Vizzion to the Aero, including the arch-shaped roof line accented by bright trim, designers have completely reinvented the sedan’s front and rear ends. The front fascia was moved in a more realistic-looking direction and given styling cues shared with other members of the ID range, including the ID.4. These changes also bring it in line with the ID.Space Vizzion concept from 2019.

Out back, the ultra-thin light bar was replaced by a bigger unit and the rear bumper was given a more elegant design. Volkswagen stresses that the ID.Aero remains a concept, but the sedan appears nearly ready for production. We haven’t seen its interior yet, however. We’re told the cabin is spacious, which you’d rightfully expect: the Aero stretches nearly 196 inches long and it’s built on a relatively long wheelbase.

The swoopy sheetmetal hides the modular MEB platform that also underpins the aforementioned 4, 3, and Buzz, among other electric cars in the Volkswagen cosmos. Power comes from a 77-kilowatt-hour lithium-ion battery pack, though there’s no word yet on whether the Aero is rear- or all-wheel-drive. Its maximum range rating checks in at 385 miles on the optimistic testing cycle used in Europe.

It sounds like Volkswagen will offer several region-specific variants of the ID.Aero. Production for the Chinese market will start in China during the second half of 2023, and the company’s plant in Emden, Germany, will begin building a European version in 2023 as well. As for the United States, an earlier press release mentioned a North America-bound model due out in 2023 but details about it remain vague.

2024 Subaru Impreza gets sportier with new…