(CNSNews.com) – The Kremlin and its allies lost no time Thursday in welcoming Boris Johnson’s imminent departure from the world stage, a reflection of the prominent role the British prime minister has played in the West’s response to Russia’s invasion of Ukraine.

That was borne out too in the sentiments expressed by senior Ukrainian officials, who warmly thanked Johnson for Britain’s robust support for Ukraine’s defense against Russian forces.

After the United States, Britain has been the biggest contributor of military assistance to Ukraine, committing weaponry worth 2.3 billion pounds ($2.76 billion) since Russian President Vladimir Putin launched the invasion in February.

Johnson became the first G7 leader to visit Kyiv after the conflict began, in early April (the Czech, Polish and Slovenian prime ministers had done so earlier), and he pushed hard at G7 and NATO summits for a strong, unified stance against Putin. He paid a second visit to Kyiv last month.

Under growing pressure over scandals at home and an avalanche of resignations of senior government officials, he announced his resignation on Thursday, but said he would remain in a caretaker position until the Conservative Party has chosen his successor.

“As for Mr. Johnson, he doesn’t like us very much; we don’t like him either,” Kommersant quoted Kremlin spokesman Dmitry Peskov as saying. “We would like to hope that someday in the United Kingdom more professional people, who understand the expediency of solving problems through dialogue, will come to power.”

But, Peskov added, “for now, one can hardly hope for this.”

Vyacheslav Volodin, speaker of the State Duma and a close Putin ally, was less diplomatic.

“The clown is leaving,” he wrote on his Telegram channel. “Despite all of his attempts and efforts, he failed to survive.”

Volodin accused Johnson of being responsible for alleged Ukrainian rocket attacks against Russian cities near the border, and described him as “one of the main ideologues” promoting a Western war against Russia “to the last Ukrainian.”

Other leaders in Europe should take note of “what such policies lead to,” he added.

Also weighing in was Dmitry Medvedev, the former Russian president who is deputy head of Kremlin’s national security council. He called Johnson’s resignation the “natural outcome of the British insolence and incompetent policies, especially on the international track.”

From the other side of the Russia-Ukraine conflict came a very different response to the developments in London.

“We all heard this news with sadness,” Ukrainian President Volodymyr Zelenskyy told Johnson in a phone call. “Not only me, but also the entire Ukrainian society, which is very sympathetic to you.”

“My entire office and all Ukrainians are grateful to you for your help. We have no doubt that Great Britain’s support will be preserved, but your personal leadership and charisma made it special.” 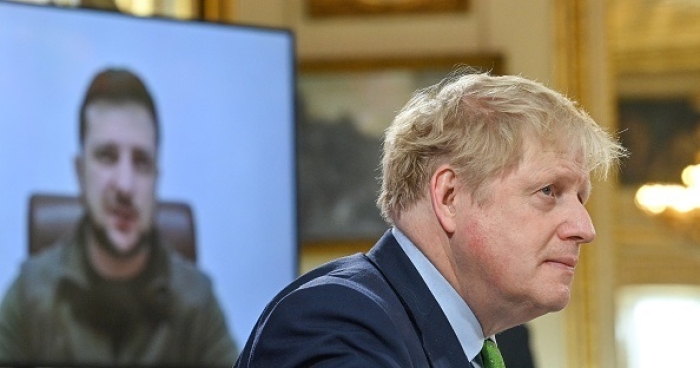 Zelenskyy’s office said the president had “expressed sincere gratitude to the prime minister for his decisive and uncompromising support for our state from the very first days of full-scale Russian aggression, as well as for his leadership in defending Ukraine’s interests in the international arena.”

In a tweet after his phone conversation, Johnson said he had reiterated Britain’s “unwavering support for Ukraine – we will supply vital defensive aid for as long as it’s needed.”

“Thank you for your friendship Volodymyr, you’re a hero, everybody loves you,” he added.

Mykhailo Podoliak, an advisor to Zelenskyy, thanked Johnson for calling out Russian “evil” and for “always being at the forefront” of support for Ukraine.

With attention turning to Johnson’s likely successor as Conservative Party leader – and thus prime minister – the first to throw his hat into the ring on Thursday was Tom Tugendhat, a backbench member of the House of Commons and chairman of its foreign affairs select committee.

Tugendhat, who served in the British Army reserves in Iraq and Afghanistan, has hawkish views on both Russia and China. In a 2018 foreign policy speech he called Putin “the man who is doing his utmost to break the international order.”

“I have served before – in the military, and now in parliament,” Tugendhat wrote in a Daily Telegraph column. “Now I hope to answer the call once again as prime minister. It’s time for a clean start. It’s time for renewal.”

Although Johnson on Thursday indicated he plans to stay on until his successor is chosen, he faces calls from senior party leaders to stand down immediately. Should he do so, Deputy Prime Minister Dominic Raab would likely take over in a caretaker capacity.

The next leader of the Conservative Party will be selected in a two-stage process: Tory lawmakers hold rounds of secret ballot votes for a slate of candidates – each of whom must be nominated by a specified number of other lawmakers – until all but two are eliminated. Then registered members of the party in a postal ballot decide between the final two candidates.

In projected matchups between the frontrunners, Wallace – also a harsh critic of Putin and his generals – looked to be a clear favorite among the poll respondents.