AARON JUDGE BEGINS 2023 as the 16th captain in the storied history of the New York Yankees.

He joins a list that features icons like Babe Ruth (who served for just five days, but … it counts), Lou Gehrig, Thurman Munson, Don Mattingly and, most recently, Derek Jeter. He’s the face of one of North America’s premier sports franchises, a celebrity in one of the world’s biggest cities. One day, his plaque likely will sit in Monument Park for his great-great grandchildren to see.

There are also the responsibilities. Like setting the tone for the team. Representing the community. Hearing complaints about airplane food.

Just ask Ron Guidry, a Yankees captain from 1986 to 1989. The former Cy Young Award winner told ESPN he once had to walk, in full uniform, into the office of the famously mercurial — and intimidating — George Steinbrenner to talk to the owner, not about pennant races or the finer points of pitching, but about the sorry state of the team’s in-flight meals.

It’s all in a day’s work for the captain of the Yankees.

Those duties now fall onto the shoulders of Judge, from what we’ll see him do every day on the field, to what we’ll never see him have to do away from it.

“We had [player] meetings because the food on the flights wasn’t good,” Guidry recalled. “Who are you gonna complain to? The players don’t want to stir the pot with the manager or ownership. They come to you, and you make a note as the captain and you have to talk to someone. You’re a spokesperson.”

Guidry said he first approached manager Billy Martin, but he could barely get a word in before Martin, a legendary figure in his own right, stopped him.

“Not my department,” Martin announced. “Go talk to the man upstairs.”

So Guidry called the Yankees executive suite and asked the switchboard operator if Steinbrenner was in. When she gave him the greenlight, Guidry ran upstairs — still wearing his pinstripes.

“I don’t have a problem with you,” Guidry replied. “Your team does.”

Steinbrenner listened as Guidry channeled his inner Jerry Seinfeld and passed on the word that the food on the team’s flights had not been up to par. Players had stopped eating it, and when they arrived in their destination cities late at night, all the restaurants typically were closed.

“I’ll take care of it,” Steinbrenner told him.

By the time the Yankees next went on the road, the team had changed airline carriers. Their first meal on the new airline? Chateaubriand steak and lobster tail.

WHEN THE YANKEES named Judge captain late last month, after the slugger signed a nine-year, $360 million contract to remain in the Bronx, the team brought out the full pomp and circumstance for the occasion. Jeter — who produced an ESPN documentary series last year called The Captain, based on his career — and Willie Randolph — Guidry’s co-captain from 1986 to 1988 — attended the press conference to help pass the baton.

Jeter and Randolph know the job comes with the increased scrutiny of Yankees fans. But the leadership title also brings many behind-the-scenes responsibilities — and, as Guidry learned, some extra clout with the bosses, too.

“I don’t have a problem with you. Your team does.”

“There’s a certain pride and strut when you know that, ‘Hey, I’m the captain of the New York Yankees,'” Randolph said. “You feel responsibility in your preparation in spring training, in the offseason, to not just think about yourself, your teammates, how you can motivate them to be champions. It’s a 24/7 mentality that you need to carry, even when the season is over.”

It’s a role Judge has grown into through the years, particularly over the course of his historic 2022 season. The leadership transition started during his historic rookie season in 2017 — when he hit a rookie record 52 homers — as veteran teammates handed him the controls to the clubhouse Spotify account. Seven seasons into his career, Judge remains the Yankees unofficial DJ before and after games.

As Judge chased and ultimately surpassed Roger Maris’ American League single-season home run record last year, his influence transcended his playlist. His consistent pregame preparation inspired teammates. Through the ups and downs of the season, they looked to Judge for guidance — like him, never getting too high, never getting too low. By the end of the season, teammates were calling him the captain of the team, even if Judge didn’t formally hold the title yet. Still, when Hal Steinbrenner offered it to him in December, he was stunned.

Said Judge: “I was at a loss for words.”

Guidry and Randolph had also become the clubhouse choice for captain before Hal’s father officially anointed them. Both players had spent nearly a decade with the team and were the team’s longest-tenured players when they got the call.

“It’s a tremendous honor to get it solidified,” Randolph said, “but you grow into your leadership role. Everyone’s different, you can’t put a stamp on how someone did it. You have to do it the way you feel comfortable doing it. You gotta be yourself. People can smell when you’re not being authentic.”

For Jeter, Judge’s authenticity is self-evident.

“It’s not like you flip a switch and have to be someone else because you’ve been given this title,” Jeter said. “I would assume he’s been handling himself like a captain up until this point, which is why they named him captain.”

The tradition of Yankees captain dates back to future Hall of Famer Clark Griffith, who held the title from 1903 to 1905, though the role was left unfilled for nearly 40 years following the untimely retirement of Gehrig in 1939, due to ALS. Guidry learned what the captaincy means by watching Munson, the first player to take the mantle after Gehrig. Munson served as captain of the Yankees from 1976 to 1979, until a plane crash took his life. Guidry debuted for the Yankees in 1975 and spent the first four years of his career around the catcher.

“He didn’t have to tell you how to be a leader,” Guidry said. “If you’re on a team and you have a captain, you just watch how he performs the task of being a captain. When he speaks, what he says, when he picks the time, does he leave you alone, does he take you off on the side? Does he call a team meeting or leave the team alone?”

During one winning streak, Guidry remembers players in the Yankees clubhouse getting excited, but Munson immediately threw water on the fire — telling the group not to get too “slap happy.”

“What are you gonna say when you go into a five-game losing streak?” Munson told the clubhouse.

Said Guidry: “It would bring us right down to being level-headed again. It took 15 seconds, but those 15 seconds had a lot of weight behind it.”

Munson’s biggest impact, according to Guidry, came in 1978, when the Yankees found themselves 14 games behind the Boston Red Sox for first place at the All-Star break. New York was struggling with injuries and didn’t have many of its best players on the field throughout the early part of the season.

“He kept us all together,” Guidry said. “We knew we were good, but what was going on was not working for us. It seemed like everything was against us. But all of a sudden, you keep playing and you keep plugging away and then all of sudden, you rip off five, six, seven games in a row.” 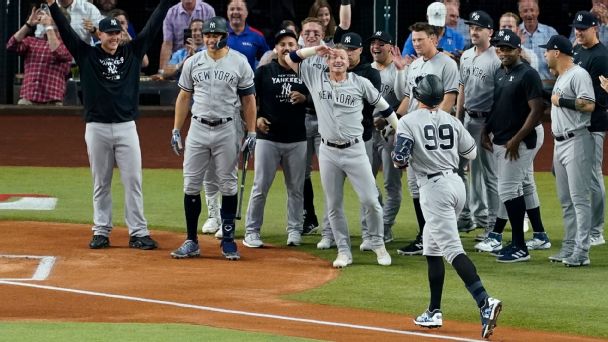 Aaron Judge’s Yankees teammates talk about the 62 home runs that made MLB history in 2022. Joon Lee »

The Yankees would eventually win the World Series after climbing all the way back in the division, then beating Boston in the AL East tiebreaker game on a go-ahead home run from Bucky Dent.

“He told us to be patient with everything, and it all came true,” Guidry said. “He always picked the right time to bring it out. He made you feel like you were gonna win. So when I became the captain with Willie, I knew what I needed to do.”

Guidry and Randolph said being a sounding board was among their most important responsibilities. That meant listening to teammates vent about their frustrations on the field, and sometimes serving as an intermediary between players and management.

But the responsibilities extend beyond the ballpark, as Yankees fans look to the captain as a role model in the community. Guidry said he was always careful about where he went because he did not want to get bad press for being at the wrong place at the wrong time. He avoided downtown Manhattan so he didn’t get mobbed by fans, but when he encountered them, he tried to keep negative thoughts to himself.

“Sometimes you have to bite your tongue because people are really disgruntled when the team isn’t doing well,” Guidry said. “They have something to say and what they’re saying is not something you want to hear. You can’t get into an argument with them because if somebody snaps a picture and it gets out, then what you’ve been preaching in the clubhouse, you’re a hypocrite doing the opposite.”

Randolph always thought about how he carried himself — from his body language on the field and in the streets, to his choice of words.

“You have to embody all the cliches,” Randolph said. “Take things day by day, stay even keel. But it has to be natural.”

JUDGE KNOWS HE has a lot to live up to.

Judge often gets compared to Jeter for the way he interacts with the media, rarely giving a quote that could ruffle someone the wrong way or cause controversy. Beyond that, Jeter sees similarities between himself and his successor.

“In terms of mindset and what’s most important in terms of winning, he has that same mindset.” 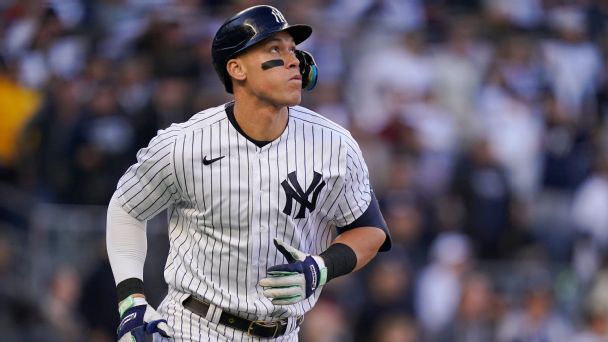 We take you inside a wild 24 hours in San Diego.

Jeter said he hasn’t been around the team enough to make further comparisons. Instead, the Hall of Fame shortstop pointed to the current Yankees clubhouse for proof Judge can handle the job.

“Talk to his teammates, talk to his coaches. talk to his manager,” Jeter said. “I mean, [manager Aaron Boone] spoke for what? Thirty-five minutes [at the press conference]? You listen to everyone speak about him and that tells you all you need to know.”

Jeter made a point to remind Judge the title isn’t just an ego boost. It’s a responsibility.

“Yankee fans are big on history and tradition,” Jeter said. “It’s not a title that’s thrown around too lightly.”

Judge takes the newfound weight on his shoulders seriously.

And if he needs any advice, say on how to handle complaints about airplane food?