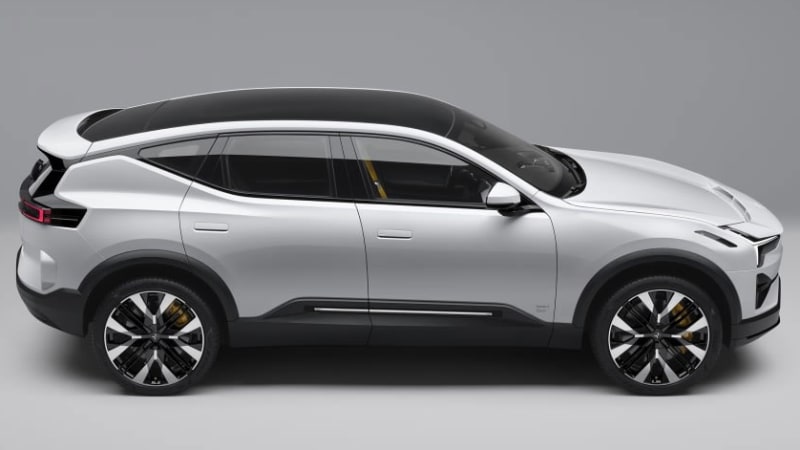 The Polestar 3 debuts October 3, the same day orders open for the battery-electric SUV repeatedly pitched against the Porsche Cayenne. The comparisons were correct, based on comments from Polestar CEO Thomas Ingenlath at the Automotive News Europe Congress. He said his brand’s first SUV will start at 75,000 euros and top out around 110,000 euros. Because the euro and U.S. dollar are almost even, prices will probably be similar in dollars, meaning a range of about $75,650 to $110,950. The 2022 Porsche Cayenne starts at $73,650, the Cayenne GTS — six trims below the flagship Turbo GT — starts at $114,550.

We don’t have specs on the 3 yet, but we do know it will pack a two-motor powertrain. In the $53,300 Polestar 2 liftback sedan with dual motors, output comes to 408 horsepower and 487 pound-feet of torque standard, hitting 60 miles per hour in 4.6 seconds. Those figures can be upgraded to 476 hp and 502 lb-ft for buyers who select the Performance Pack, the 60-mph sprint coming down to 4.2 seconds. The Cayennes in the same price bracket max out at 455 hp and 516 lb-ft of combined output on the Cayenne E-Hybrid, the Porsche needing 4.7 seconds to reach 60 mph when equipped with the Sport Chrono Package. All of which is to say the template has already been established for challenging a Porsche, so we wouldn’t be surprised if the 3 is even more potent. If Polestar hits its range estimate of 372 miles on the WLTP cycle, our version could do better than 300 miles on the EPA testing regimen.

The 3 goes into production later this year alongside the coming battery-electric Volvo XC90 replacement, thought to be called the Embla. Polestar will double its attack on the Germans next year with the Porsche Macan-rivaling Polestar 4.