(CNSNews.com) – Former House Speaker Nancy Pelosi (D.-Calif.) sent out a pair of tweets on Martin Luther King Day in which she quoted King as saying that God did not intend for a one class “of people to live in superfluous inordinate wealth.”

“Today, our nation celebrates on of our greatest heroes,” Pelosi said.

“Dr. Martin Luther King, Jr., dedicated his life to the cause of equality—not only in laws, but in hearts and minds as well,” she said.

“To this day, his clarion voice and unbreakable spirit still inspire our fight for justice,” she said. 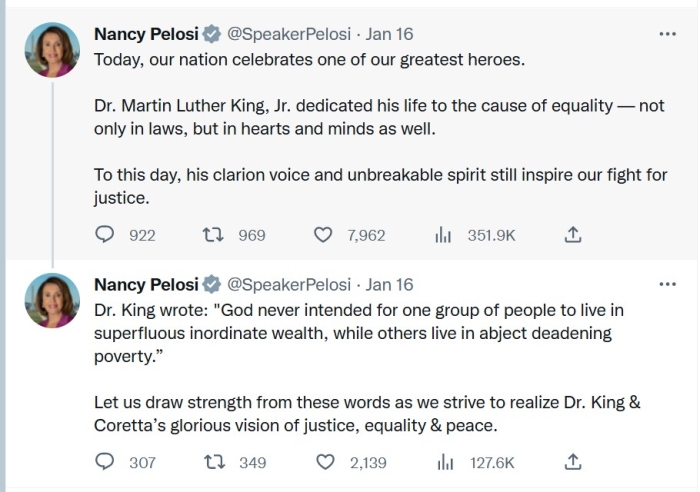 Earlier that day, Pelosi had sent out a tweet that said: “Dr. King wrote: ‘God never intended for one group of people to live in superfluous inordinate wealth, while others live in abject deadening poverty.’

“Let us draw strength from these words,” Pelosi said, “as we strive to realize Dr. King & Coretta’s glorious vision of justice, equality & peace.”