MANHATTAN BEACH, Calif. — Who among us hasn’t imagined what it would be like to drive a car from the future? And we’re not talking about a 2028 Honda Prelude or whatever, interesting as that may be. No, we’re talking decades, maybe even centuries beyond what we have now, where even quaint notions like circular tires are reimagined. Something akin to a spinner from “Blade Runner” or one of those light cycles from “Tron.” So color us stunned when Mercedes-Benz actually offered us some seat time behind the wheel of their Vision AVTR concept.

Mercedes unveiled the AVTR at CES in 2020 as a tie-in to the upcoming movie “Avatar: Way of the Water,” which will hit theaters December 16.The car and the motion picture have the same name, though Mercedes says that AVTR stands for Advanced Vehicle TRansformation. To understand what that means, we have to catch up on the fantasy world writer/director James Cameron created.

“Way of the Water” is a sequel to 2009’s “Avatar,” which imagined a future in which humans have depleted most of Earth’s natural resources. To keep civilization going in the year 2154 they need to mine other planets, including the Earth-like moon Pandora. Unfortunately for the humans, a sentient race of blue-skinned humanoids resides on Pandora, keeping us from harvesting a compound named, literally, unobtainium. These Na’vi live in harmony with nature, hunting with bows and arrows, wearing loincloths, and generally wishing not to be exterminated by a heavily militarized space mining corporation.

The film was groundbreaking in its use of special effects. Cameron — of “Titanic,” “Aliens” and “Terminator 2: Judgment Day” fame — said that he wanted to make the movie in the 1990s but had to wait a decade for technology to catch up. We say this only in an attempt to explain just how much of a visual feast the natural beauty of Pandora was. Cameron painted a world awash with bioluminescence, lush vegetation and spectacular landscapes. 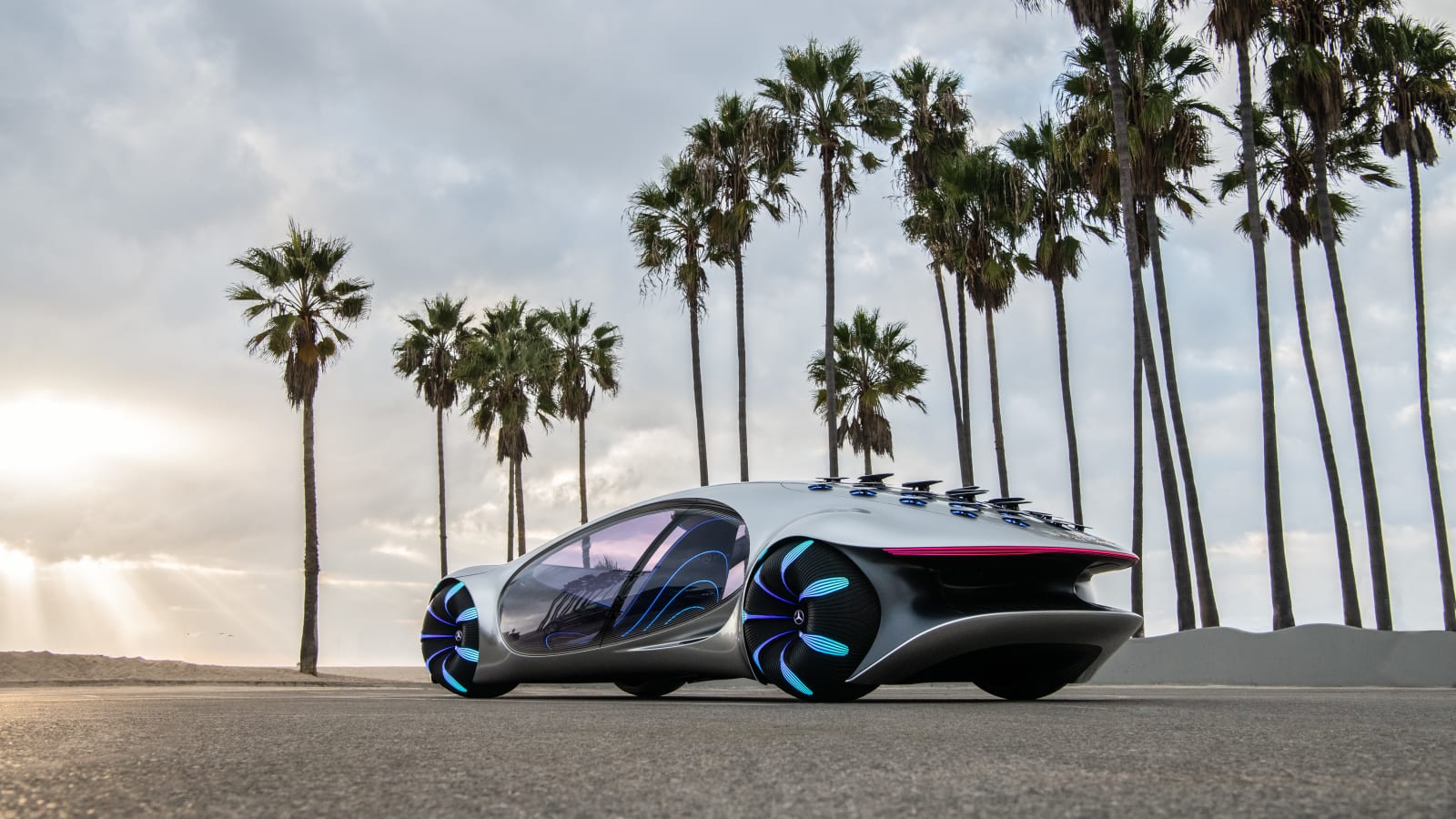 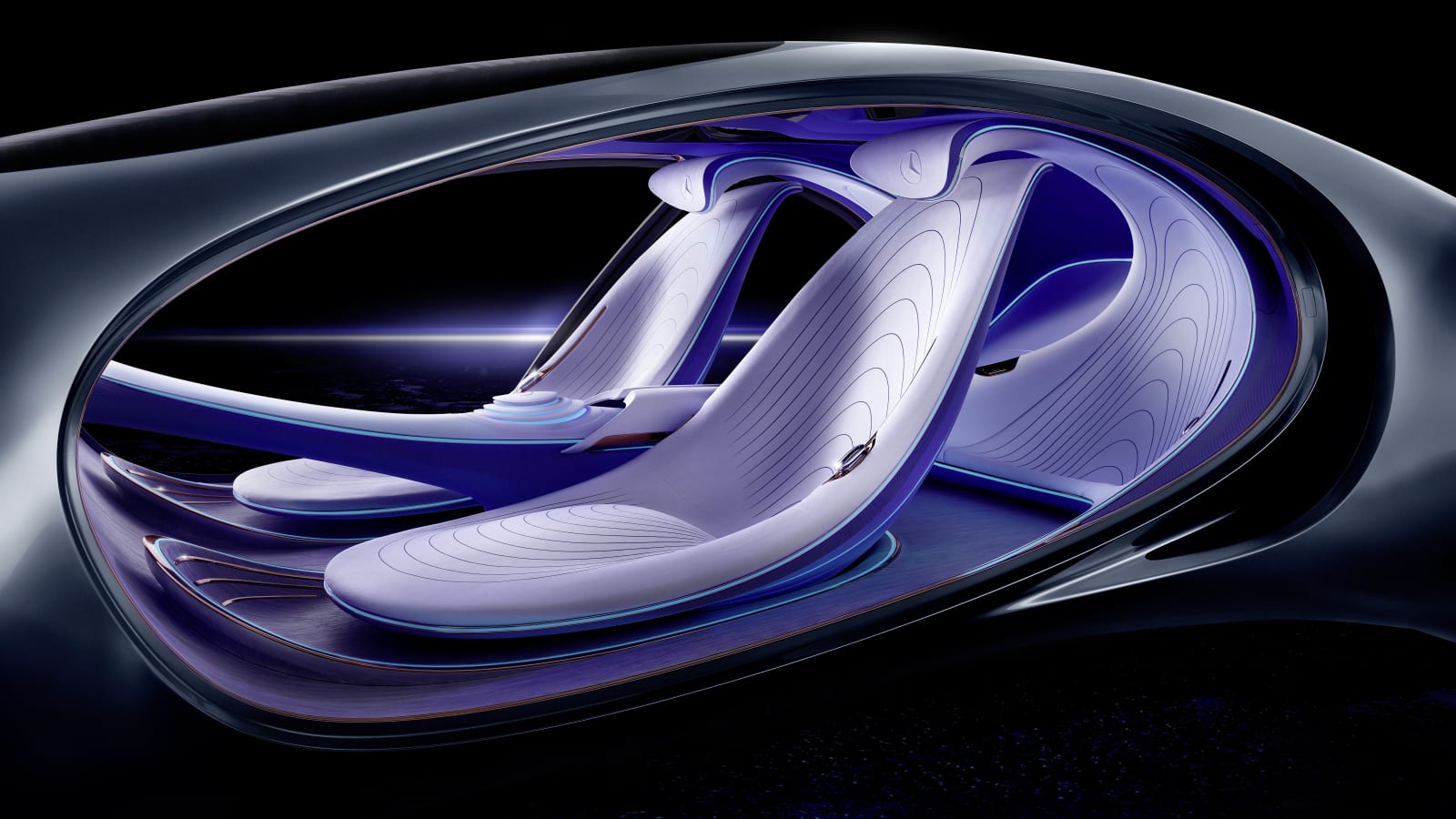 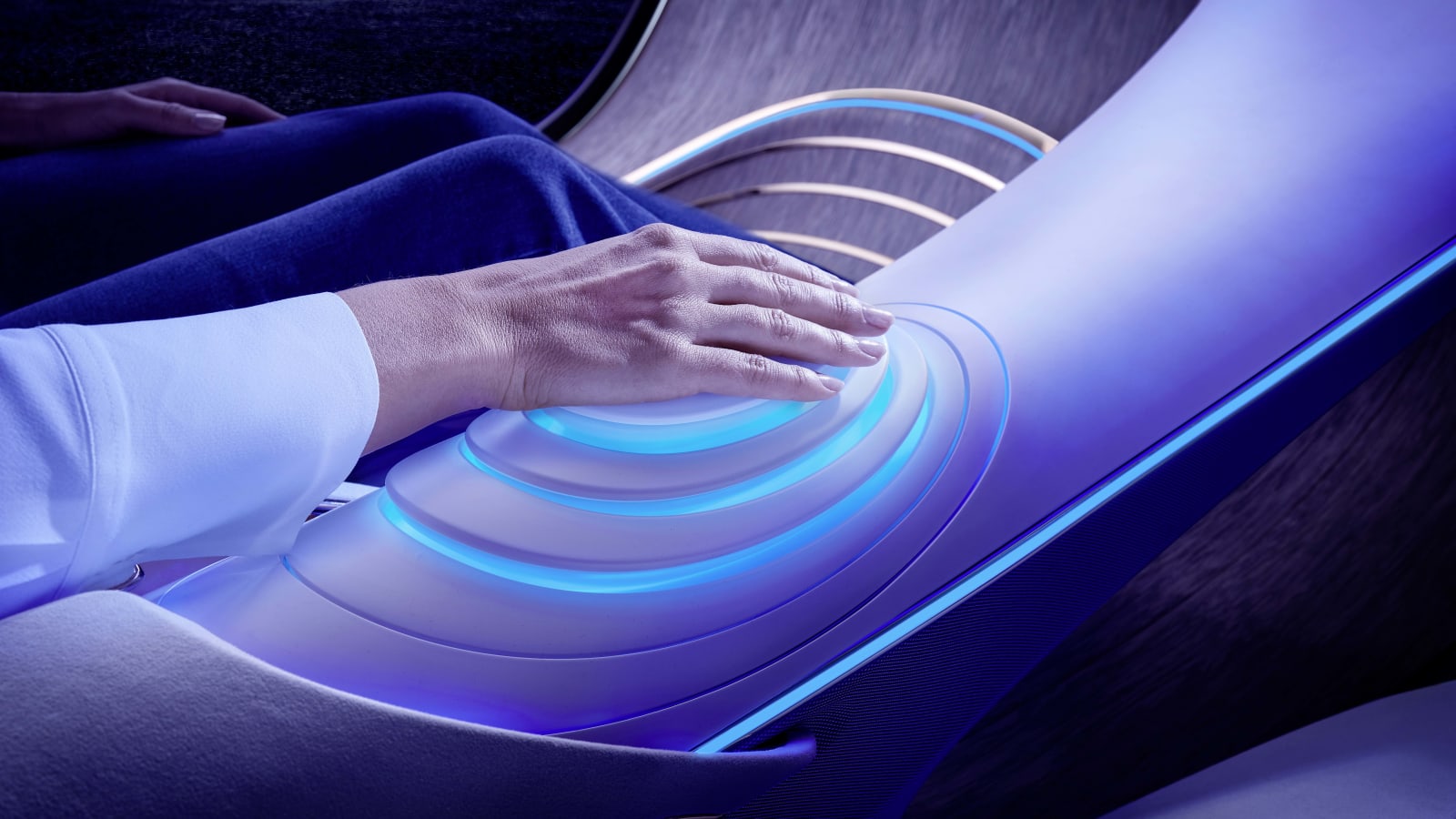 Mercedes’ designers wanted to make the AVTR look as if it belonged in this world. As such, the car is imbued with design so organic it makes a 1996 Ford Taurus look like a Volvo 240. In profile, its lines are fluid and unbroken as a river pebble’s, with no angles or corners to denote a traditional three-box shape. An ultra-low roofline melts into a glass bubble cabin nestled more between the wheels than above them. Speaking of the wheels, they’re urethane-skin spheres instead of traditional discs.

The most animal-esque feature of the car can be found on the back, where an array of 33 bionic flaps open and close independently of one another. Each moves on carbon fiber hinges that accordion like pieces of origami. Their lightness allows for extremely quick actuation, and they can be programmed to flicker in a wave-like pattern like a bird fluffing its feathers. The honeycomb of holes radiates blue light, but if you were to stop suddenly, the flaps would go vertical like air brakes while the openings glow red. It’s an undeniably neat effect, but you probably shouldn’t stare at them too long if you suffer from trypophobia.

To be clear, the car never actually appears in “Avatar: Way of the Water.” In the movie, machines are the enemy, destroyers of the natives’ lifestyle. Also, the Na’vi civilization is pre-agrarian, and it would be rather difficult to drive a car in a land where no paved roads exist.

It would’ve been easy — expected, even — for Mercedes to stop there. Many show cars aren’t drivable, but it went ahead and built an actual running concept and let ham-fisted journalists go for a spin.

Approach the car and it comes to life with a dazzling array of lighting animations that pulse and ebb like the glowing flora of Pandora. It’s almost as if the car is breathing, a sensation amplified by the twitching of the back flaps. Gander at the illuminated front end graphic and you’ll see where the EQS and EQS SUV got their noses. LEDs streak down the lower shelf beneath the taillight like comets. Even the wheels have throbbing light patterns that form the “spokes.” Mercedes chief of design Gorden Wagener says they were inspired by the wood sprites from the film.

Glass scissor doors swing open on massive chrome hinges to allow access to the cabin. Points of light swirl and trace the edges of nearly every interior surface, adding to the sense that the car is somehow alive. Settling in gracefully requires you to back your posterior onto the thin, leaf-like seats, then swing your legs into the car.

The AVTR is so low that you don’t sit so much as you do recline. The first thing you notice is that there’s no steering wheel, no screen, no controls of any kind before you. The dash is simply one sweeping blank curve. All movement of the car is done through a mushroom cap-like joystick in the center console. Its location means either driver or passenger can operate it. 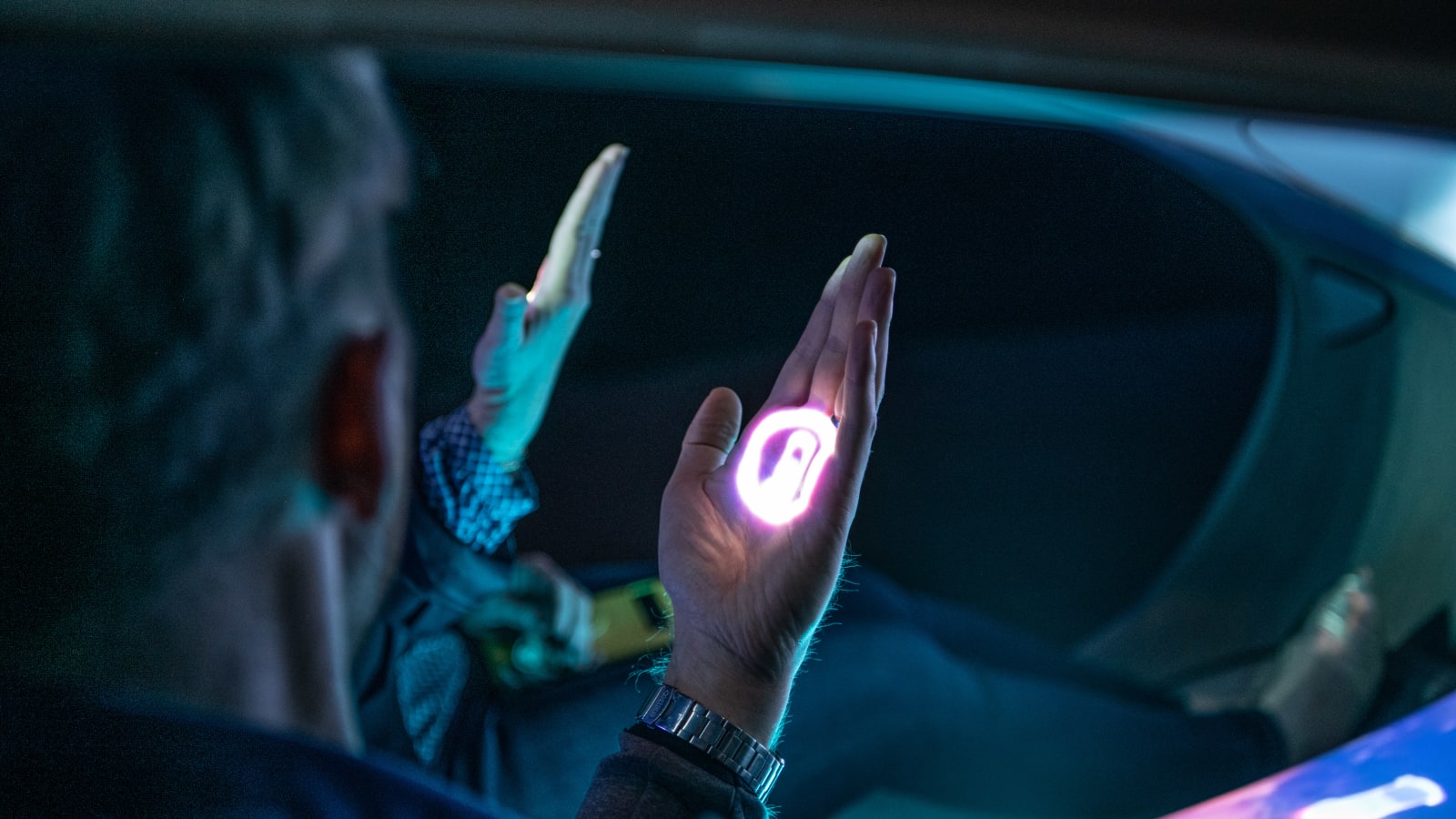 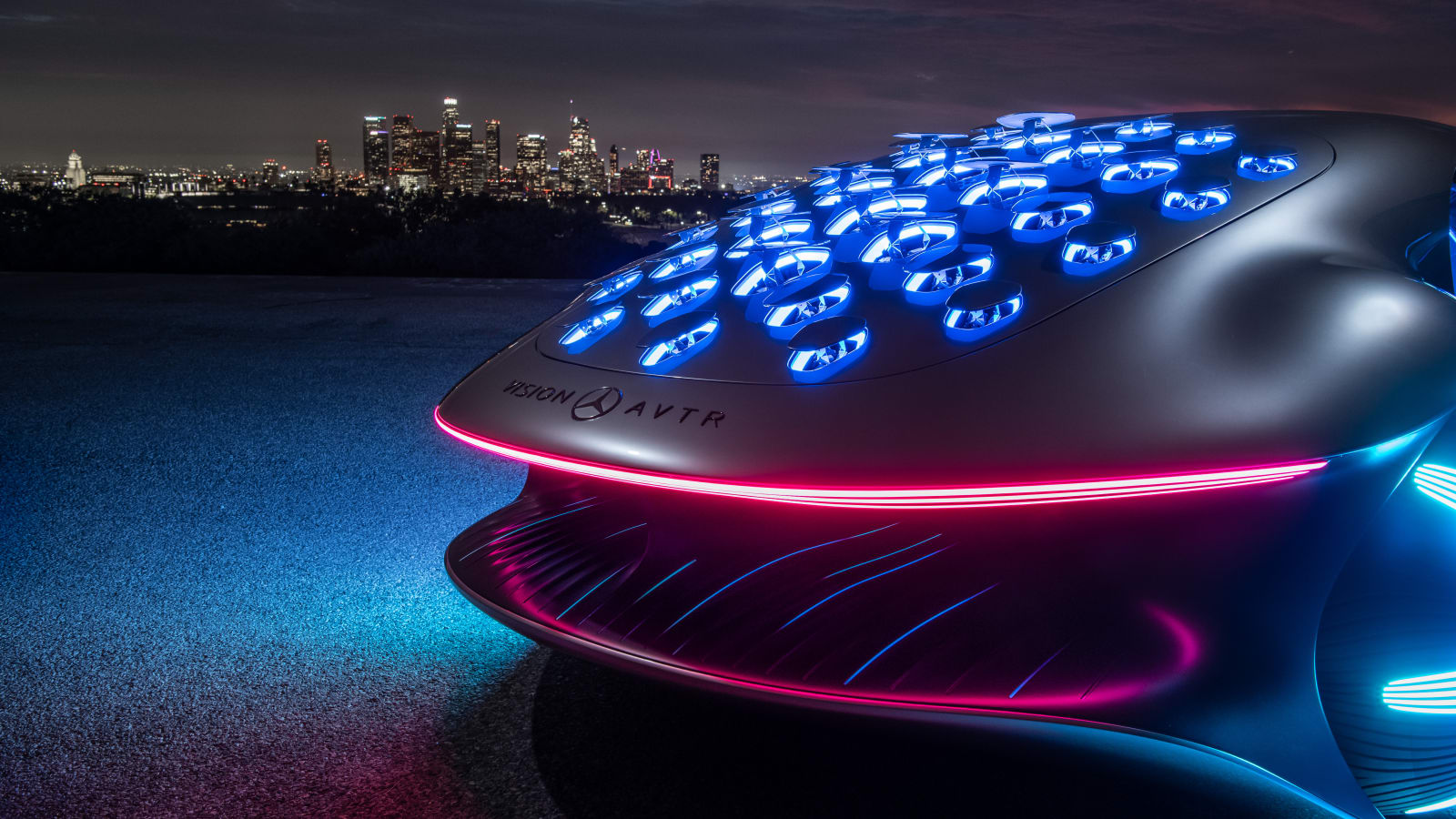 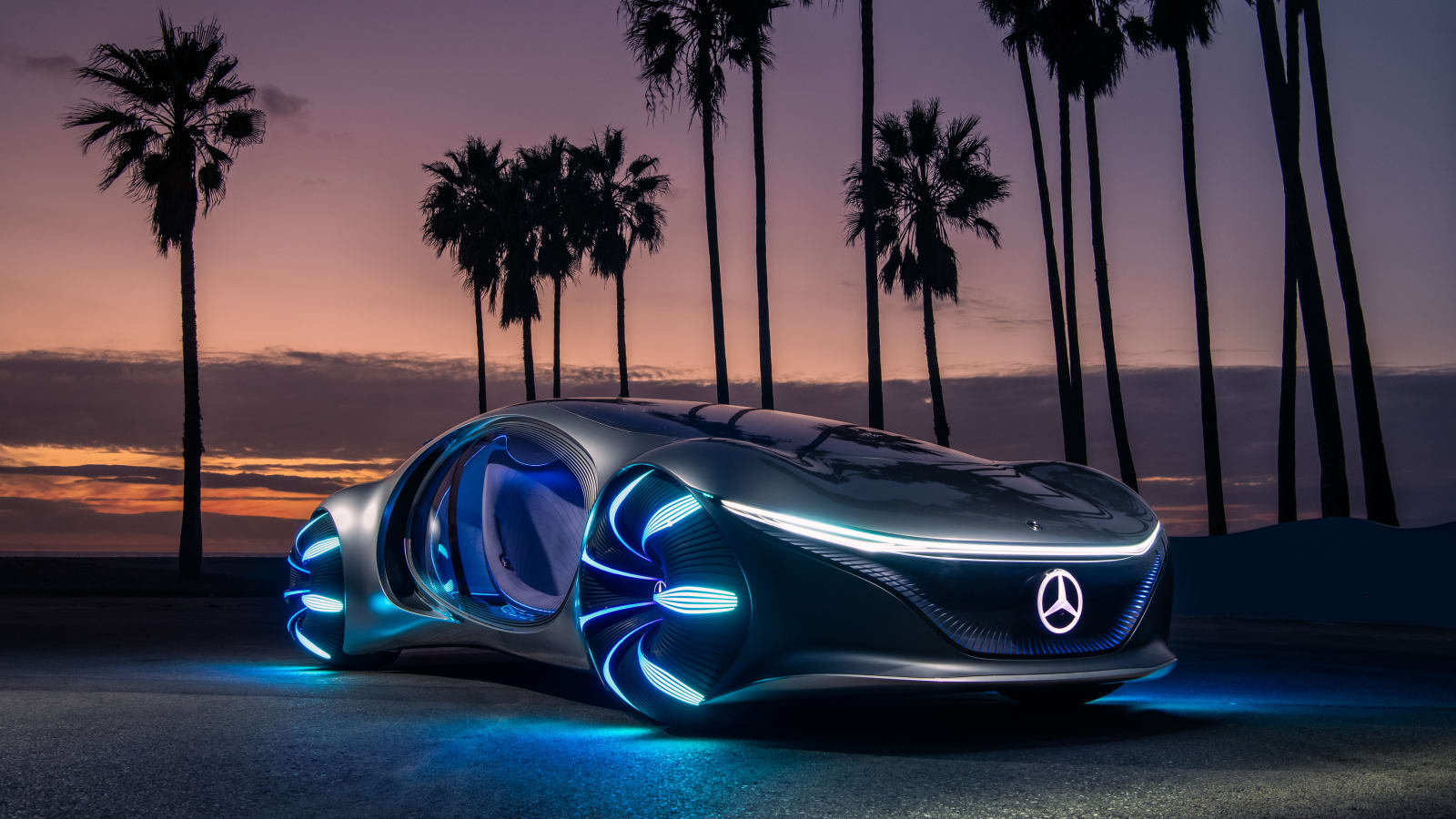 Push the pad forward for Drive, push it backwards for Reverse. Roll it to the left or right to turn in that direction.The AVTR has rear-wheel steering, so the front and rear wheels can angle in opposite directions for a tightened turning radius. Rotate the pad to the left or right and the wheels will angle in the same direction for a diagonal crabwalk. And no, the wheels don’t actually spin in three dimensions like Will Smith’s Audi in “I, Robot.” The spherical shape looks cool, and only the band at the “equator” ever touches the ground. That’s how the lighting on the tires remains undamaged.

We were able to test these functions in a short drive around a parking lot, but it wasn’t as intuitive as it sounds. To my brain, it would’ve been more natural to rotate to turn and roll to crabwalk. It was also a tad difficult to finesse the pad slowly while the car was in motion, as the car has almost no suspension and minor bumps would transmit through my arm to unintentionally jolt the controller. It’s not the fault of the technology per se. This is just a concept and not designed to be driven at more than a few miles per hour. It also admittedly may have been easier if I were using my dominant hand.

The absence of a steering wheel lets the entire expanse of the curved dash become a screen of sorts. An overhead projector beams a map onto the surface, and as a nod to the movie, Pandora is one of the selectable locations. Changes to the menu are made via gesture. Simply raise your hand to a spot above the console and you’ll see icons projected onto your palm. Then you flick your hand to the left or right to make selections. Like a touchscreen, it takes considerable focus, so such a system would only be prudent when the car is in autonomous mode.

Because environmental consciousness is a major theme of the “Avatar” movies, Mercedes says that the 110-kWh battery is organic and compostable thanks to the use of graphene and no rare earth metals. Total system horsepower is 469, and power comes from four motors, one at each wheel.

It’s a fascinating thought exercise to imagine how a car from 2154 — or perhaps more accurately, a car not born on planet Earth — might differ from our current machines. Mercedes engineers assured me that I’d get used to it with more practice, but perhaps it was too big of an evolutionary leap for this particular human.