In Malaysia, a Political Stalwart Bows Out

Standing on a podium, in front of the tower erected in his name, Mahathir is giving what will end up being the last campaign speech of his career. Tun Mahathir Mohamad, nicknamed Tun M or Dr. M, is the poster boy for the Malay conservative party Pejuang, which he created in 2020. As he addresses the crowd on the night of November 18, on the eve of Malaysia’s 15th General Election, the words are flowing, echoing the chants of a thousand people: “Hidup Tun, hidup Tun!” Long life to Tun. Indeed, a long life it has been.

Mahathir was born in 1925, the same year as Malcolm X and that is just a year before the late Queen Elizabeth II. He grew up in the town of Alor Setar in the northern state of Kedah; his father was a schoolteacher and his mother a housewife. A few blocks away from Mahathir’s house lived Daim Zainuddin, who would later become his minister of finance and closest adviser.

Mahathir witnessed Malaysia’s history, from the Japanese occupation in 1942, independence from Great Britain in 1957, and the separation of Singapore from the Federation of Malaya in 1965. He shaped the country’s political future, spending 29 years as a Cabinet Minister (education, deputy prime minister, trade & industry, home affairs, defense, and finance), and then serving 22 years as prime minister from 1981 to 2003. He then capped this off with his incredible comeback as prime minister in 2018, a role he occupied until the collapse of his government in 2020.

After an extraordinary career, and a controversial legacy, Mahathir returned again to the island of Langkawi, the parliamentary constituency he won in 2018. Dr. M had been sent to Langkawi as a young physician in 1956, after he joined politics, and later pushed for the development of the island and opened its shores to international tourism and exhibitions. As Malaysia’s general election campaign got underway earlier this month, the 97-year-old political titan said he was ready to climb to the highest post again, for what could be his 25th cumulative year in power. “Being a member of parliament for Langkawi does not give enough for me to lead a good government,” he confessed during a conversation before his speech on November 18.

Mahathir spent most of his career in the United Malays National Organization (UMNO), a party he joined in 1946, and which ruled Malaysia from independence in 1957 until 2018. In 2015, Mahathir resigned from UMNO in protest at its then president, Prime Minister Najib Razak, his former protégé. The party was torn by the revelations of what would soon become the largest financial scandal in the world, and the biggest embezzlement of state funds in Malaysia’s history. The 1MDB scandal involved a complex weave of Malaysian leaders, global financiers, scammers, and super-stars from Kuala Lumpur to Hollywood, from Najib Razak to Leonardo DiCaprio.

Mahathir’s resignation from UMNO was the first of a long series of departures and dismissals of UMNO leaders. In 2016, the group of individuals who had questioned Najib’s involvement in the 1MDB scandal, including Muhyiddin Yassin and Mahathir son’s Mukhriz, formed a new party: Parti Pribumi Bersatu, or Bersatu (Together). While Bersatu fiercely represented Malay interests in a multi-cultural and multi-religious context in which only 60 percent of the population is Malay-Muslim, Mahathir knew that if he was to topple UMNO and its coalition Barisan Nasional (BN), he would need to include non-Malay leaders.

In December the same year, Mahathir approached the leader of the democratic or Reformasi movement, Anwar Ibrahim, to form an alliance. Anwar, once upon a time Mahathir’s favorite-turned-opponent, was no stranger to Mahathir’s power strategies.

In the early 1980s, Mahathir had coopted Anwar Ibrahim from the ranks of the student Islamist movement, in order to neutralize the movement in the aftermath of the Iranian revolution. Anwar was then the leader of Angkatan Beliau Islam Malaysia (ABIM), the country’s largest Islamist youth organization. Mahathir hoped to tame the movement by coopting Anwar, its symbolic leader, and by allowing him to implement Malaysia’s first Islamization policies – an Islamization that has impacted Malaysia until the present day. Mahathir never had much sympathy for any ideology he perceived as being on the far-end of the political spectrum, whether Islamism or communism. And so by bringing the Islamist agenda under the control of the government as envisioned by Anwar, Mahathir wanted to prevent the Islamist movement from radicalizing further, avert the risk that it would destabilize a multi-religious society, and erase any threat to his government.

Under Mahathir’s wing, Anwar rapidly rose to become his deputy in 1993. However, due to differences of opinion between the two men over the handling of the 1998 economic crisis, combined with the excessive popularity of Anwar, Mahathir sacked the political prodigy from his government. In response to Mahathir’s rule, Anwar led a movement of Reformasi, and soon emerged at the head of the opposition to Mahathir’s rule (after the Islamist movement he had emerged from). As a results of his audacity, Anwar was soon charged with corruption and sodomy in 1999; he was later sentenced to six years imprisonment.

From the Reformasi movement emerged the Parti Keadilan Rakyat (Justice Party, or PKR) led by Wan Azizah Ismail, Anwar’s wife. Anwar was released in 2004, and then jailed again under the Najib government in 2015. However, in 2016, he agreed to hand over, for a moment at least, the leadership of his movement to Mahathir in order to bring down UMNO. Mahathir’s Bersatu then joined the PKR-led coalition Pakatan Harapan (PH), which also included the predominantly ethnic Chinese Democratic Action Party (DAP) and the moderate Islamist party Amanah. Mahathir promised to Anwar that he would deliver the Malay votes (snatched from UMNO) that his party had always felt able to gain, secure Anwar’s release from prison upon victory, and then allow Anwar to succeed to him as prime minister within a reasonable, though unspecified, time. In January 2018, just a few months before the 14th General Election, Mahathir was announced as the prime minister candidate of PH, the same opposition movement he had once repressed, now united by the common goal of destroying UMNO, the party he had once helped form. 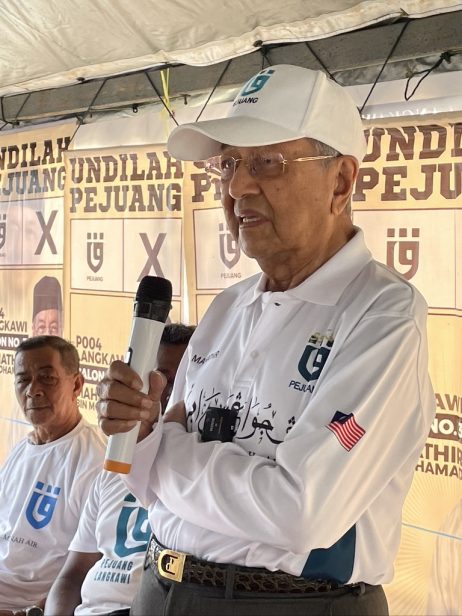 The Anwar-Mahathir (political) marriage of convenience enjoyed a short – indeed very short – honeymoon. As promised, Anwar was released within a week of PH’s historic electoral victory in May 2018. While Anwar pushed to take over the reins of the government a little too soon, Mahathir hold on a little too long. The feud between the two leaders contributed to instability within the PH coalition government. Eventually, Mahathir resigned. As his government collapsed in January 2020, Mahathir was expelled from his own party, Bersatu. His resignation sent PH back into opposition; and UMNO, the big loser of 2018, made its way back to power in a coalition with the new leadership of Bersatu. Four years and four governments later: all players were back to their initial position in this Shakespearean-inspired political game.

On that night in Langkawi, with Mahathir on stage, it seems as if the past four years had been an ellipse in history. The speech sounds very similar to the one Mahathir gave just a day before his historical comeback in 2018. Mahathir attacks UMNO and Najib and rambles about the 1MDB financial scandal. However, we are now in 2022, and Najib is in prison for his role in the scandal and has no role to play in this campaign. Anwar gets his fair share of attention, too. Mahathir asks his audience to reject negara pencuri or “kleptocracy” and he also asserts vividly “Saya tolak LGBT”: I reject LGBT. The latter is a direct attack on Anwar Ibrahim, whose reputation had been tainted by past charges of sodomy, for which he was pardoned by the King. In Mahathir’s rhetoric, a vote for PH would pave the way for the legalization of same-sex marriage.

One might think that such a speech was out of date, and that with the influx of 1.5 million new voters aged 18-20 this discourse would not resonate with the masses. On the contrary, as shown by the results of the election held the next day, Malaysian young voters are rather conservative. However, their hopes and votes did not materialize in a victory for Pejuang and Mahathir, but rather for the country’s largest Islamist party, PAS, that won 49 seats in parliament, the highest return in its history. Meanwhile, Pejuang and the GTA coalition of which it was part, were wiped-out: all 121 candidates, including Mahathir and his son Mukhriz, not only lose their election, but lost their electoral deposit, too. Akhramsyah Sanusi, the head of research of Pejuang, explains: “We knew from the beginning it was gonna be tough (…) We saw the possibility for him to lose, but never that bad. We thought the swing (of voters) would go to the UMNO candidate, not to PAS.”

I asked Mahathir why he would gamble his seat and risk losing rather than just retiring. He explained: “I love my country, I have a duty to prevent its destruction… In politics, sometimes you win, sometimes you lose. I am ready for that.” On November 23, just a day before Anwar was sworn in as the 10th prime minister of Malaysia, after decades in opposition, Mahathir released a statement explaining he decided to retire from politics and to allow himself more time to write and record history as he made it.

As controversial as Mahathir may be, he remains an iconic figure of Southeast Asian politics and an historical advocate for the development and sovereignty of the Global South. For decades, his voice has been heard, admired, respected, and hated around the world. Mahathir walked with Malaysians from the 20th century into the 21st, and his story will be forever intertwined with that of his homeland. However, as he tells me: “I don’t want a personality cult. I don’t care about my legacy. I’ll be dead anyway.”