Hunter Biden, the son of current President Joe Biden, networked with a high-ranking official at the Chinese embassy during a state dinner hosted by then-Vice President Biden and former Secretary of State Hillary Clinton, emails reviewed and verified by Fox News digital show.

Ahead of a star-studded extravaganza to be hosted for Chinese president Hu Jintao at the U.S. State Department, Hunter Biden’s business associate who was at Guardian Realty, Marvin Lang, thanked him for a lunch they appeared to have had in Bethesda, Maryland in December 2010.

Hunter’s former business associate Eric Schwerin, currently described as a “52-year-old fixer” with deep ties to the Bidens, and who has “made at least 27 visits to the White House and other official venues during the Obama/Biden presidency,” sent an email to Lang about business networking that Hunter Biden had made at the star-studded state dinner hosted by Joe Biden and Hillary Clinton on January 19, 2011. 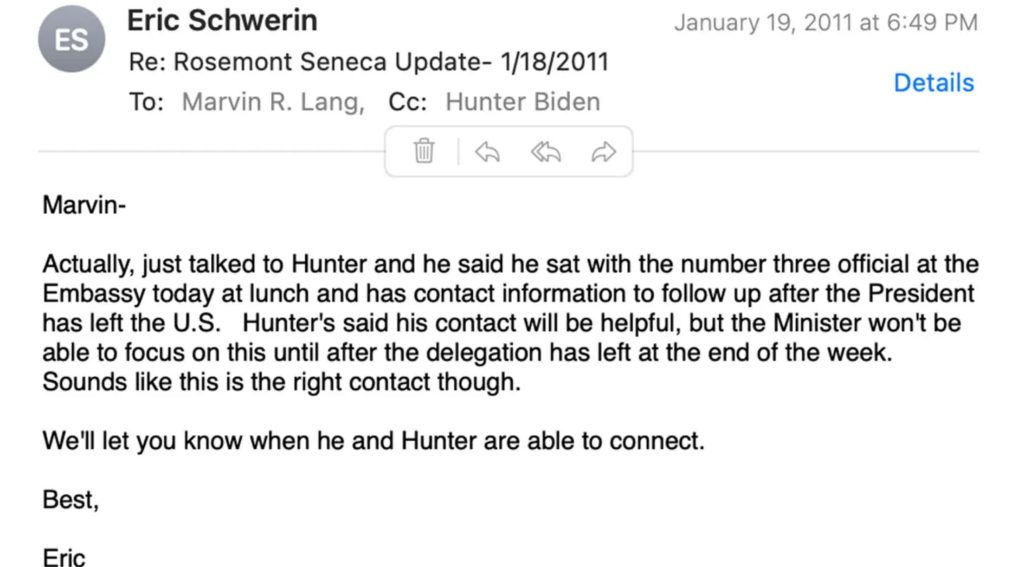 “Marvin – Actually, just talked to Hunter and he said he sat with the number three official at the Embassy today at lunch and has contact information to follow up after the President has left the U.S.,” the January 19 email said. “Hunter’s said his contact will be helpful, but the Minister won’t be able to focus on this until after the delegation has left at the end of the week. Sounds like this is the right contact though. We’ll let you know when he and Hunter are able to connect.”

Hunter Biden’s contact with the ‘number three official’ at the embassy, a Chinese ambassador named Deng Hongbo, came at a January 2011 dinner at the U.S. State Department hosted by then-Vice President Biden and former Secretary of State Clinton, which was attended by many of the most powerful and influential people in the country. 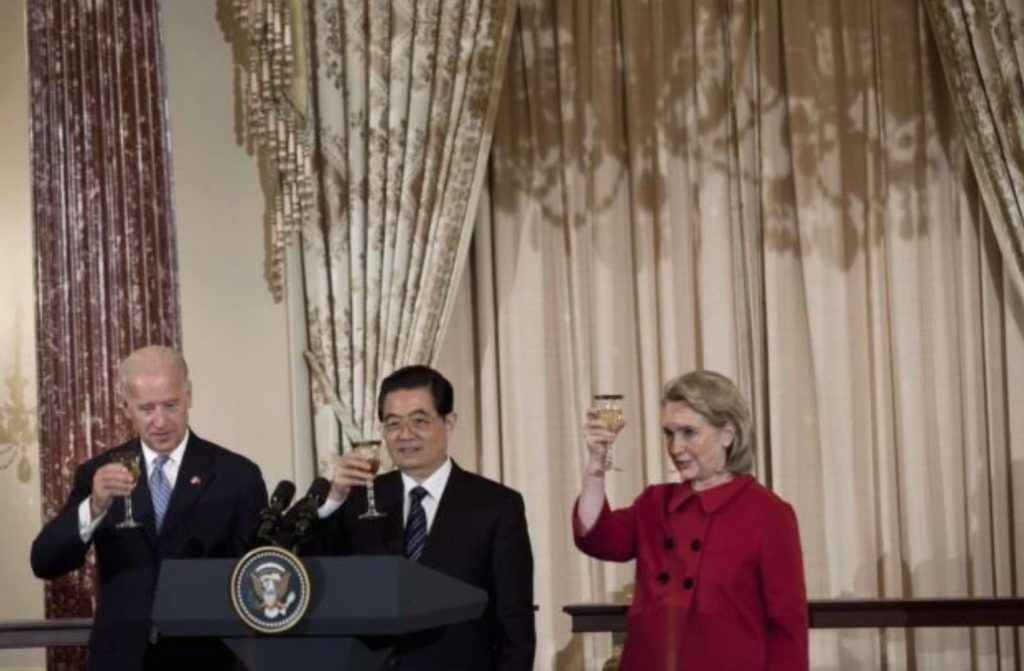 Marvin Lang, described on Guardian Realty’s official website as the Managing Director of Guardian, Chairman of the Board of GRM; Chairman of the Executive Committee of GRM since 1992, is a long-time Democrat donor who has given tens of thousands of dollars to the party. 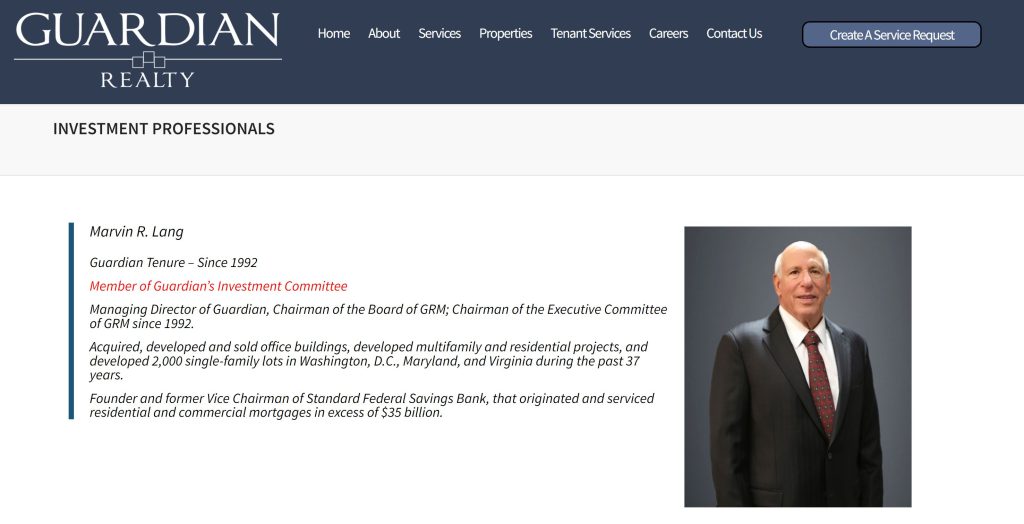 The Chinese official is described by the Chinese embassy’s website as the Deputy Chief of Mission and Minister Deng Hongbo. 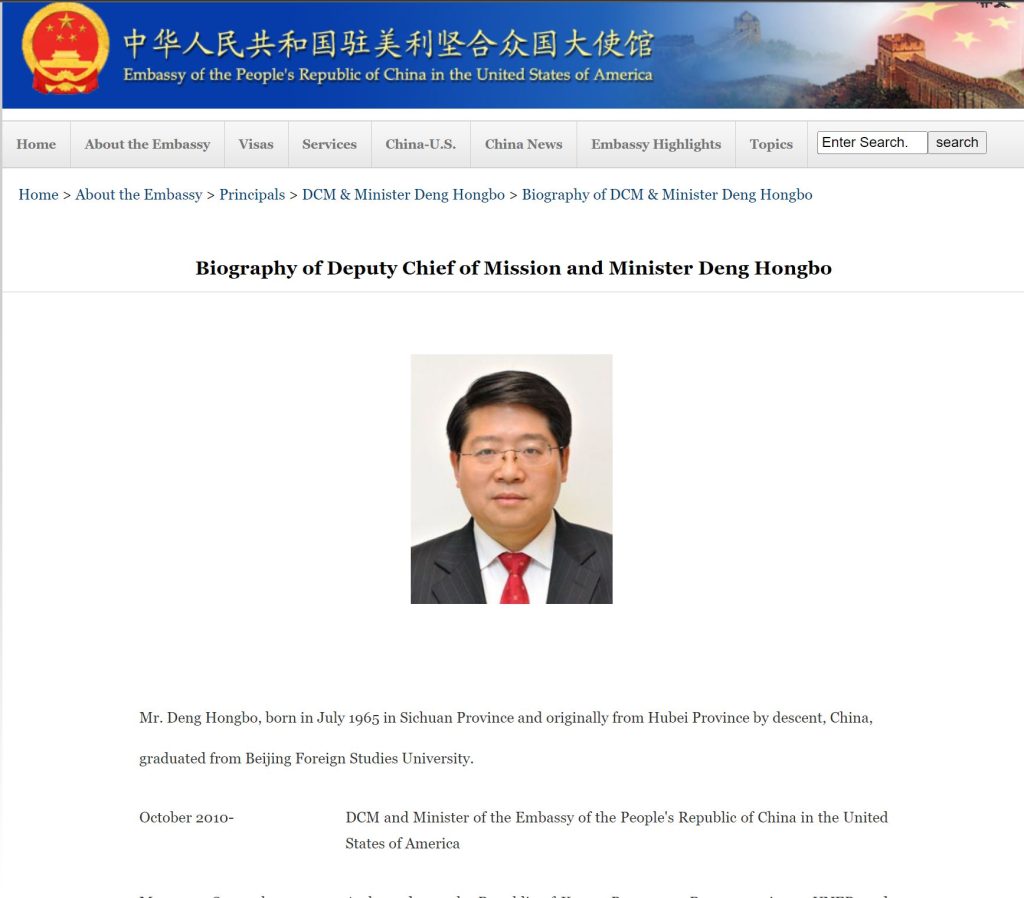 The subsequent meeting between Marvin Lang and Deng Hongbo was announced on the embassy’s official website in May 2011. 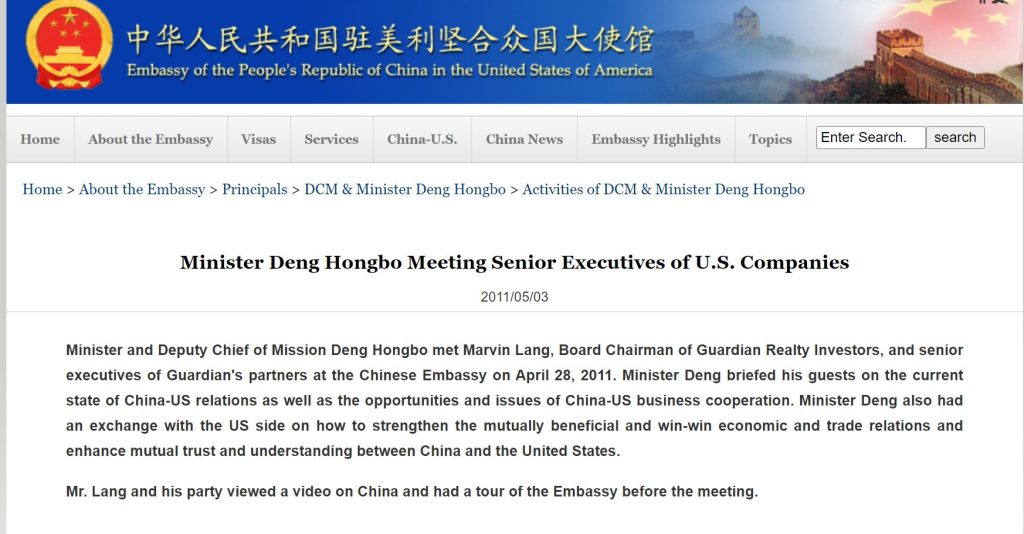 “Minister and Deputy Chief of Mission Deng Hongbo met Marvin Lang, Board Chairman of Guardian Realty Investors, and senior executives of Guardian’s partners at the Chinese Embassy on April 28, 2011,” the announcement says. “Minister Deng briefed his guests on the current state of China-US relations as well as the opportunities and issues of China-US business cooperation. Minister Deng also had an exchange with the US side on how to strengthen the mutually beneficial and win-win economic and trade relations and enhance mutual trust and understanding between China and the United States. Mr. Lang and his party viewed a video on China and had a tour of the Embassy before the meeting.”

The night before the state luncheon that Hunter Biden would attend, Schwerin gave Hunter directions on whom to contact on behalf of Guardian. 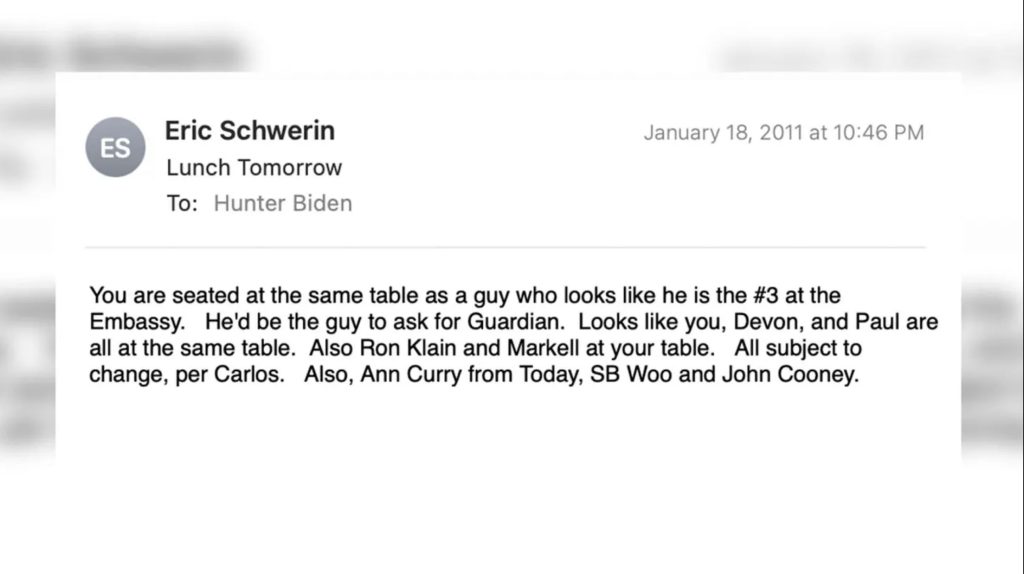 “You are seated at the same table as a guy who looks like he is the #3 at the Embassy,” Schwerin wrote in the email. “He’d be the guy to ask for Guardian. Looks like you, Devon, and Paul are all at the same table. Also Ron Klain and Markell at your table. All subject to change, per Carlos. Also, Ann Curry from Today, SB Woo and John Cooney.”

Ron Klain is currently Biden’s chief of state. Hunter Biden’s partner at Rosemont Seneca was Devon Archer. Archer would be sentenced in NY District Court in early 2022 to one year plus one day in jail, a year’s parole, and $15 million in forfeiture, for defrauding a Native American tribe.

The emails acquired and verified by Fox News Digital also indicate that Hunter Biden was seemingly in contact with high-ranking officials in the Chinese Communist Party’s Politburo, such as “Minister Yang,” an apparent reference to Yang Jiechi, who was China’s foreign minister from 2007 until 2013. Jiechi was promoted to the Politburo in 2017, and is one of the most powerful officials in China.

The White House has long denied that current President Joe Biden had any knowledge of his son Hunter Biden’s business dealings.

However, there is a growing body of evidence that suggests this is not the case. A recently exposed email shows Hunter Biden boasting of the influence he has on his father. Hunter said that he, referring to his father Joe Biden, will “talk about anything that I want him to.”

“If I say it’s important to me, then he will work a way in which to make it a part of his platform,” Hunter Biden said.

Hunter Biden’s verified laptop and emails lead many to believe that Joe Biden not only had knowledge of his son’s business dealings, but he may have actively facilitated them.

Republicans are calling for a Special Counsel investigation into the matter, but their concerns have been repeatedly dismissed by Attorney General Merrick Garland.

The Special Agent in Charge of the Hunter Biden laptop investigation, who was credibly accused of mishandling the probe, suddenly resigned in late August in the midst of an Inspector General probe into the case’s handling. The agent has denied any wrongdoing in the matter.

FBI Director Christopher Wray said in Senate testimony in August that the FBI agent’s partisan social media posts and internal reports that he was mishandling the Hunter Biden probe were “deeply troubling.”