Citroën Oli concept is electric and made from cardboard (sort of) 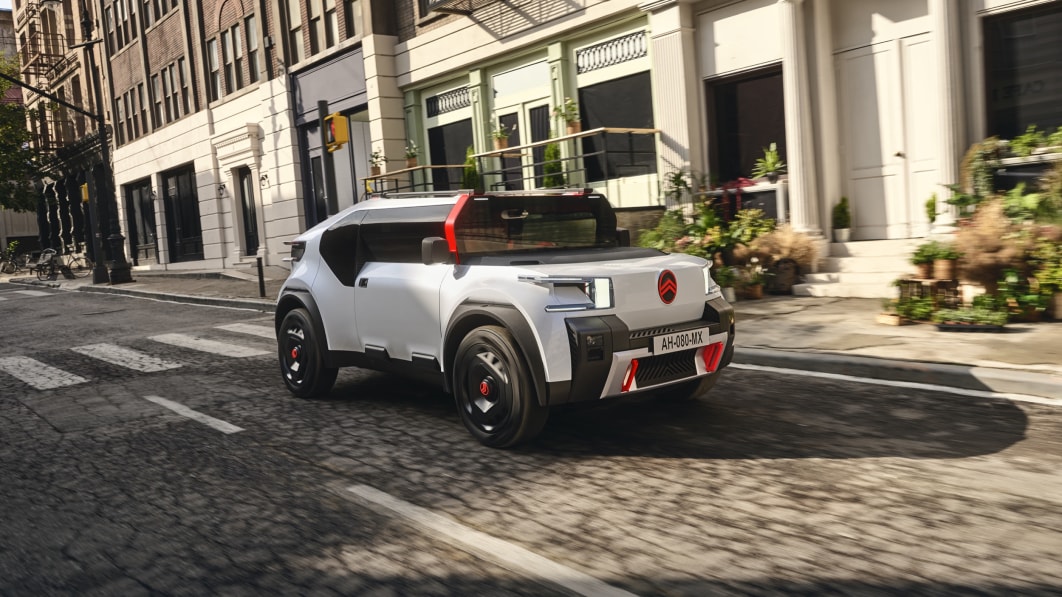 The wee-little pug-nosed beastie you see here is the brand-new Citroën Oli concept, and it’s not like other cars. You see, most vehicles are made from stampings of steel and aluminum. A few, like the Chevy Corvette, have bodies formed out of fiberglass, the DeLorean was famously stamped from stainless steel and the former East German Trabant was fashioned out of something called Duroplast, which is sort of like Formica. The Citroën Oli is “made from recycled corrugated cardboard formed into a honeycomb sandwich structure between fiberglass reinforcing panels.”

We know what you’re thinking, because it’s the first thing we thought too. How can cardboard stand up to the weather, impacts and stresses that cars will undoubtedly have to contend with? The quirky French automaker has answers. Citroën partnered with BASF to design the material, and it’s coated in a kind of resin, then covered in a protective layer of a “tough, textured” product called Elastocoat that’s often used in parking garage construction, and finally painted. Bumpers are formed from polypropylene plastic containing 50% recycled materials, and the wheel arches are recyclable plastic, too.

Why go to such trouble to use this material instead of just relying on time-tested metals? Citroën says the panels are strong enough for an adult to stand on them, 50% lighter than steel and fully recyclable (to be fair, steel and aluminum are also commonly recycled). The emphasis on weight savings continues throughout the Oli’s design. The body panels are all either perfectly horizontal or vertical, simplifying construction and reducing weight. Even the windshield is perfectly vertical, which again reduces weight and cost. That all maximizes interior space, too — there’s a reason boxes are square, after all. Speaking of the interior, you’ll notice there aren’t any screens.

With all this talk of unique construction methods and design, we’ve not yet talked about propulsion. As you’d expect, the Oli is electric, but we don’t know much past that. With its comparatively small 40kWh battery pack, it can travel up to 248 miles, though we’re not sure on what testing regimen. Its top speed is capped at 68 miles per hour, which is a clear indicator that this machine is designed primarily for urban and small-town rural use, not long stretches of highway. Citroën claims a charge from 20% to 80% takes just 23 minutes, though the actual charging specifications aren’t known. Its battery pack can also be used for energy storage that can be used as a generator or fed back into the grid.

According to the automaker, “Oli acts as a precursor to the concepts and innovations that will be available in future Citroën electric models.” It will be interesting to see how many of the unique concepts make it into future production models, but we don’t expect to see anything like this for sale anytime soon, particularly in the United States.