(CNSNews.com) – The Kremlin has again slapped down questions about President Vladimir Putin’s health, attributing them to deliberate fake information coming from the U.S., Britain, and Ukraine.

Putin’s health is “fine,” Kremlin spokesman Dmitry Peskov told reporters of the veteran Russian president, who turns 70 in November. “He is in good health.”

“Ukrainian, U.S., and British information specialists have been spreading bogus stories about the president’s health condition in recent months,” he said. “These are nothing but fakes.”

Russian media outlets noted that when Putin addressed a business forum on Wednesday, he had apologized for a cough.

Peskov attributed the cough to air conditioning units that were operating during Putin’s visit to Iran earlier in the week. While it was 40 degrees Celsius outside, he said, it had been “chilly” under the air conditioners.

“My voice became husky too. Such things happen. No big deal.”

Putin’s behavior and decision-making this year, particularly with regard to the invasion of Ukraine, have sparked speculation about possible physical or mental health difficulties.

Foreign Minister Sergei Lavrov, asked about the rumors during a French television interview in late May, gave them short shrift, suggesting that those raising issues were the ones with the problem.

“President Vladimir Putin appears in public every day. You can watch him on screens, read and listen to his speeches,” Lavrov said. “I don’t think that sane people can see in this person signs of some kind of illness or ailment. I leave it to the conscience of those who spread such rumors despite everyday opportunities to make sure who and what they look like.”

In an appearance Wednesday at the Aspen Security Forum in Colorado, CIA Director William Burns was asked about Putin’s health.

“Would you describe him as unstable?” asked NBC News’ Andrea Mitchell, the event moderator. “Unhealthy?”

“There are lots of rumors about President Putin’s health, and as far as we can tell he’s entirely too healthy,” he quipped. As the audience laughed, Burns added, “That’s not a formal intelligence judgment.”

“I’ve watched and dealt with Vladimir Putin for more than two decades now and, you know, I’ve watched him stew in what is a very combustible mix of grievance and ambition and insecurity,” he said.

“He’s professionally trained to be a cynic about human nature. He is relentlessly suspicious, always attuned to vulnerabilities that he can take advantage of. He’s not a big believer in the better angels in the human spirit. He’s a big believer in control, and intimidation, and getting even.”

Burns said those qualities had all hardened over the last decade, as Putin has tightened his grip on power and as his circle of advisors has shrunk.

“His own sense of destiny and his appetite for risk has grown significantly over that time as well,” he said. “Nowhere are those views harder than on Ukraine. That’s how I think we need to understand Putin’s decision-making in the run-up to the war.” 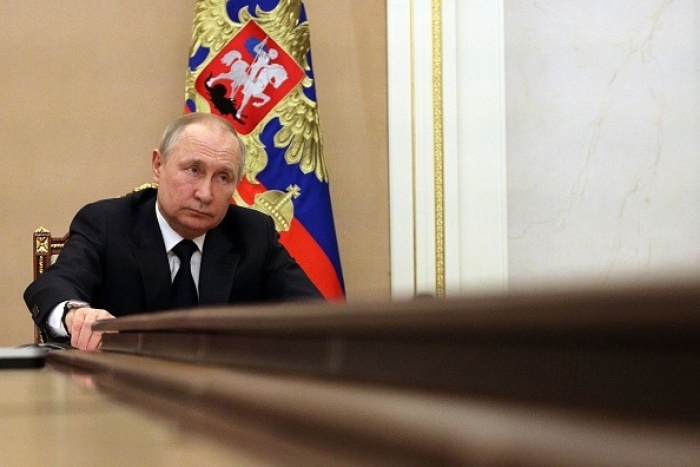 Putin chairs a teleconference meeting with members of the government in March. (Photo by Mikhail Klimentyev/ Sputnik /AFP via Getty Images)

Burns is believed to be the last senior U.S. official to have had a face-to-face meeting with Putin. He traveled to Moscow last November to urge the Russians not to go ahead with what intelligence agencies assessed were plans for a major invasion of Ukraine.

Burns said at the Aspen event that he had left that meeting “even more troubled than when I arrived.”

He said Putin had not denied the allegations, and although his impression was that Putin had not yet made an irreversible decision to go ahead, “he was clearly leaning hard in that direction.”

Sen. Paul: Terrorist Watchlist Encounters Up at Border Because ‘The Whole World is…