Indonesian authorities are hoping that the return of Chinese visitors will mark the beginning of the end for the island’s long COVID-19 slump. 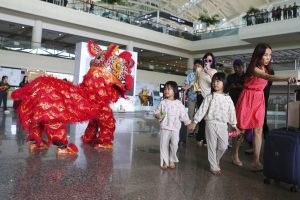 A lion dancer welcomes Chinese tourists on their arrival at Ngurah Rai international airport in Bali, Indonesia on Sunday, Jan. 22, 2023.

The Indonesian island of Bali yesterday welcomed its first direct flight from China in nearly three years, marking a possible end to the resort island’s economically destructive COVID-19 hiatus. According to The Associated Press, at least 210 people were on board the chartered plane operated by Indonesia’s Lion Air, which flew from Shenzhen in Guangdong province.

The flight followed the Chinese government’s decision to lift travel restrictions from January 8, which has stirred up hopes for the recovery of Southeast Asia’s once-vibrant tourist economies in time for this week’s Lunar New Year holiday, when many Chinese nationals venture abroad.

While Indonesia as a whole is not as tourism-reliant as other nations in the region, particularly Thailand, few regions in Southeast Asia are as heavily dependent as Bali. Tourism contributes around 5 percent of the Indonesian economy (versus around 20 percent in Thailand), but some 80 percent of Bali’s.

As with most of Southeast Asia, China had become an important part of this story. Prior to COVID-19, more than 2 million tourists from China visited Indonesia, and China had risen to become the top source of tourists to Bali. But all direct flights from mainland China to Denpasar were halted in the first half of 2020 as COVID-19 began its lethal worldwide spread, with devastating impacts on the island’s tourism-reliant economy.

In 2019, the year before COVID-19 was declared a pandemic, 6.9 million foreign nationals visited Bali; in 2021, it welcomed barely 50. As such, Bali’s recession was much worse than that of the country as a whole: the island’s economy contracted by 9.3 percent in 2020, compared to Indonesia’s 2 percent recession. As the borders were sealed, tens of thousands of workers in the tourism sector either lost their jobs or were forced to take unpaid leave.

The past year has brought a degree of respite. In March 2022, after close to two years of being blocked to foreign visitors, Indonesia began quarantine-free entry to the resort island for vaccinated foreigners. In 2022, 2.1 million international visitors arrived in Bali by air, with Australian and Indian tourists leading the revival.

At the same time, the persistence of China’s “zero COVID” policy hobbled Bali’s economy. According to the AP report, Indonesia is targeting 255,000 tourists from China this year, after recording 94,924 visits from China from January to October of last year. That the government has such relatively modest expectations suggests that for all the optimism about a rapid China-led rebound, the full recovery of Bali’s tourism economy, and that of Southeast Asia as a whole, could be some time off.

In order to attract greater numbers of visitors from China, the Indonesian authorities are considering the possibility of opening direct flights from three main cities in China, such as Beijing, Shanghai, and Guangzhou. Tourism officials in Bali have already spoken up about their intention to focus their attention on attracting high-earning Chinese tourists rather than large package tour groups.